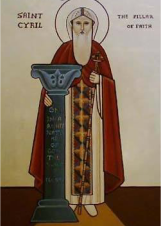 St. Cyril (Kyrillos) the Great, the Twenty- Fourth Pope of Alexandria. He was the son of the sister of Pope Theophilus (23rd patriarch). He was raised by his uncle at the school of Alexandria where he was educated in its Theological and Philosophical subjects needed to defend Christianity and the Orthodox faith.
​
After he learned a great deal of these subjects, his uncle sent him to the monastery of St. Macarius in the wilderness. There, he became a disciple to a righteous old monk called Sarabamon. He taught him the church books, and the sayings of the pure fathers. He trained his mind and body by practicing the works of righteousness and virtues for a period of time.After he spent in the wilderness five years, Pope Theophilus sent him to Abba Sarapion, the honorable bishop, so he increased in wisdom and knowledge. Shortly after, the bishop returned him to Alexandria. His uncle was rejoiced, ordained him a deacon, appointed him a preacher in the cathedral and made him his scribe. Whenever Kyrillos gave a sermon, he captured the hearts of his listeners with his eloquence, fluency, and his strong influence. Since that time, he became well known for his vast knowledge, his great righteousness, and his deep influence in his teaching.​​

Then his uncle Pope Theophilus departed in the 18th of Paope 128 A.M. (October 27th, 412 A.M.), they enthroned this father in his place on the 20th day of Paope, 128 A.M. (Oct. 29th, 412 A.D.). The church was illumined with his knowledge, and he gave special attention to resisting paganism and defending the Christian faith. He started to refute the falsity of Emperor Julian the Infidel in his ten essays that had been written after his apostasy. These were the favorite readings of the pagan young people of Alexandria and their pride, for they believed that it destroyed the principles of the Christian faith. Pope Kyrillos refuted them in terms that were clear, strong and convincing.

He set out to rebut the heretics until he was able to close their churches and seize their contents. He ordered the expulsion of the Jews from Alexandria which led to a disturbance and confrontation between the Jews and the Christians. This led to the widening of the contention between the governor and this great saint. Because of his strong devotion to the Christian ethics and teachings, he found himself compelled to ask for reconciliation with the governor. However, the governor refused to accept the reconciliation, and the conflict between them continued for a period of time.When the heresy of Nestorius, Patriarch of Constantinople, emerged, a Universal Council convened for him. He denied that the Virgin was the mother of God (Theotokos). Two hundred bishops assembled in the city of Ephesus during the reign of Emperor Theodosius II, known by Theodosius the Less. St. Cyril (Kyrillos), Pope of Alexandria, presided over this council. He debated Nestorius, explained to him his heretic opinion, and threatened him with excommunication and exile from his Chair, if he did not change his erroneous opinion. St. Kyrillos composed twelve discourses wherein he explained the true faith, refuting the error of Nestorius. Anba John, Patriarch of Antioch, and some of the bishops of the East disagreed with him, taking Nestorius' side. Nevertheless, shortly after, they came back and agreed with Kyrillos who was victorious over the enemies of the church. He wrote many discourses and valuable epistles, confirming in them, that God the Word is One Nature, One Will, and One Person incarnated. He anathematized anyone who separated Christ or differed from this true faith. The Emperor exiled Nestorius in the year 435 A.D. to the land of Egypt, and remained in the city of Akhmim until his death in the year 440 A.D.

From the monumental works of Pope Kyrillos was the commentary of the Holy Books. When he finished his strife, he fell sick for a short time and departed in peace. He remained on the Alexandrian Chair for thirty-one years, eight months, and ten days.

May his prayers be with us. Amen.